Some services will be In-Person, check our Upcoming Worship page for details. 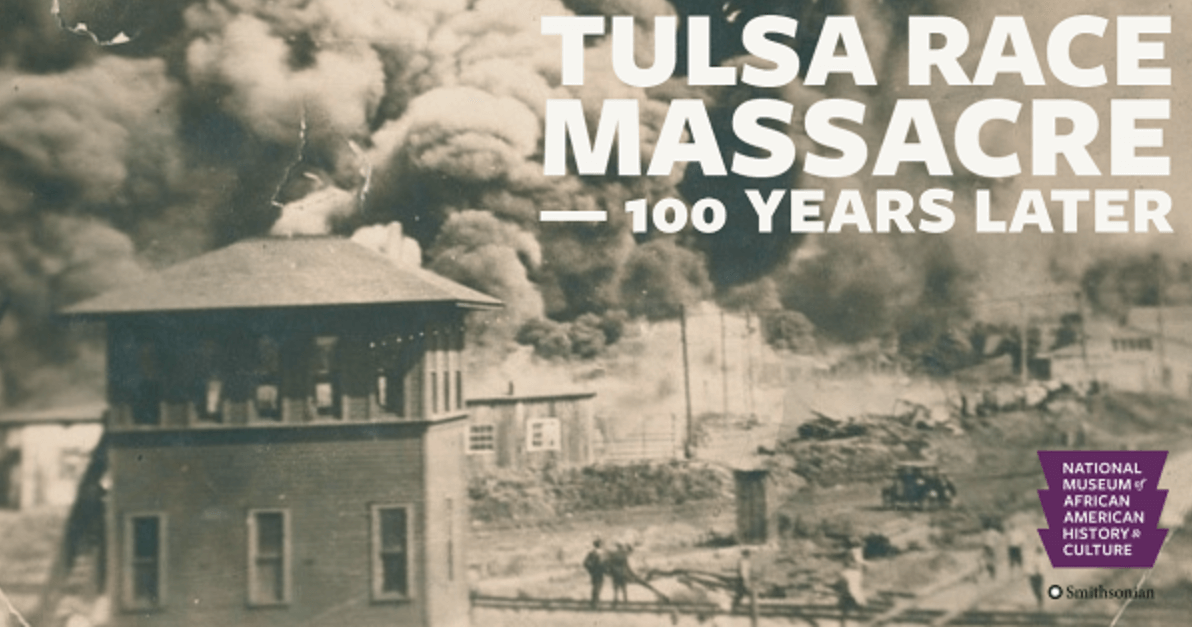 It has been 100 years since the thriving African American community of Greenwood in Tulsa, Oklahoma, suffered the deadliest racial massacre in U.S. history. While the precise number of lives lost remains unknown, we know that on May 31 and June 1, 1921, mobs of white residents destroyed more than 35 blocks of Greenwood and left about 10,000 African Americans homeless. Known as “Black Wall Street,” Greenwood was the wealthiest Black community in the United States at the time.

The National Museum of African American History and Culture (NMAAHC) invites you to mark the centennial of the Tulsa Race Massacre through the following programs, including film, panel discussion, and primary source investigations. The Museum is proud to stand with you as we examine our country’s unvarnished history and work to build a more equitable and just future. 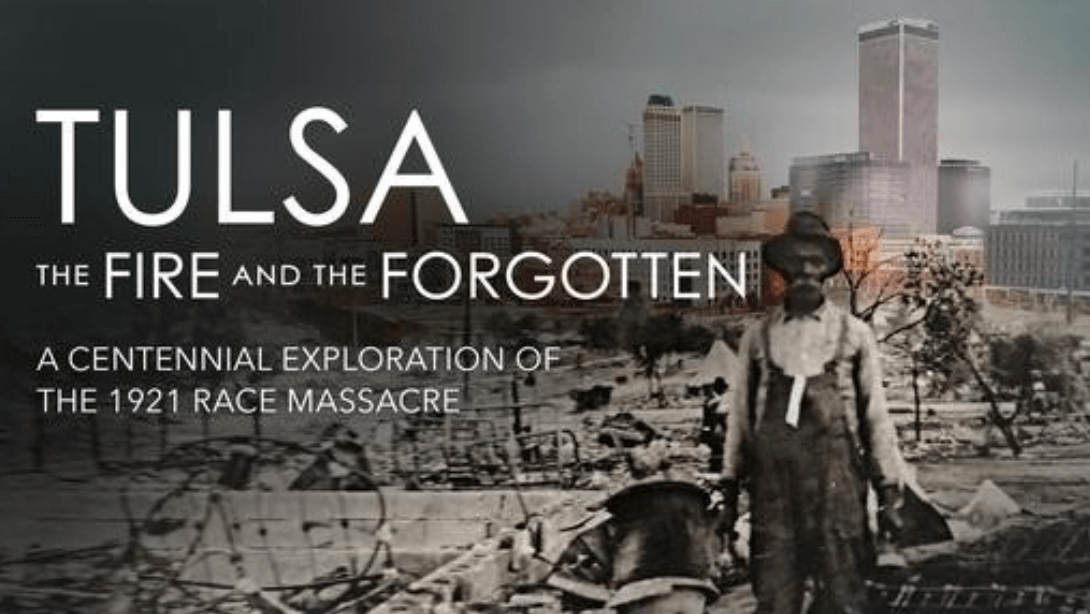 Film Preview
Tulsa: The Fire and the Forgotten
Thursday, May 20 ǀ 7 p.m. Eastern

PBS’s new documentary, Tulsa: The Fire and the Forgotten, is an expansive story that examines Greenwood — its origins and rapid expansion, deadly destruction at the hands of white mobs, reemergence thwarted by the construction of an interstate freeway, and current progress.

Tulsa: The Fire and the Forgotten is a collaboration between PBS and New York’s WNET with support from Howard University Television. The production includes interviews of the massacre’s descendants, reporting by Washington Post staff writer DeNeen Brown, and narration by National Public Radio’s Michel Martin. 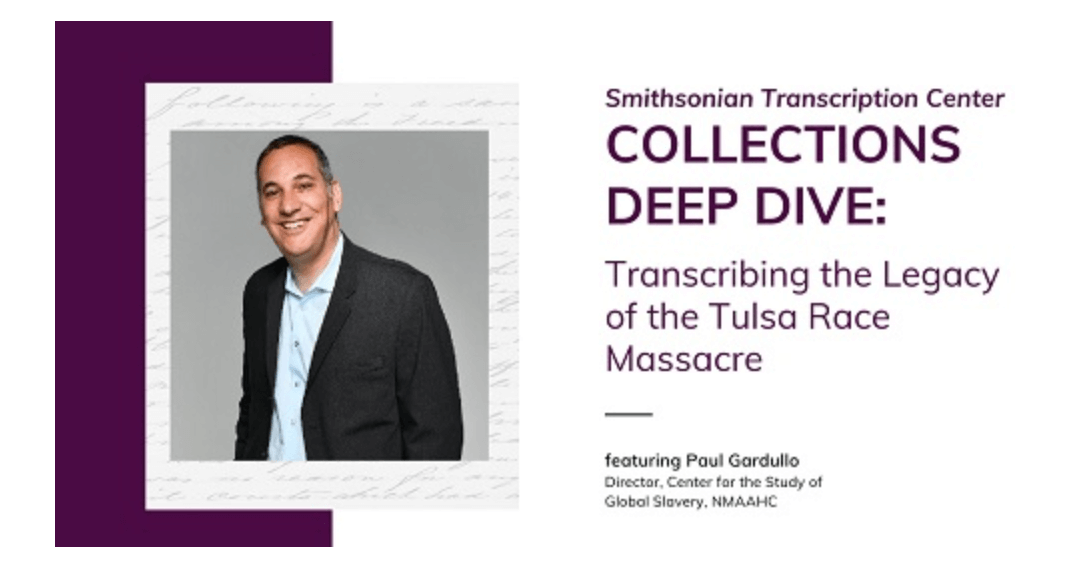 On May 17, the Smithsonian Transcription Center will post about 500 pages of new documents, scrapbooks, and other records related to the Tulsa Race Massacre for volunteers to transcribe and help make available for anyone — from historians and researchers to students and genealogists — to view from any place with an internet connection.

Then, on May 24, NMAAHC historian, curator, and project director for the forthcoming exhibition Make Good the Promises: Reconstruction and Its Legacies, as well as co-editor of the companion book, Paul Gardullo will share a live Zoom webinar to talk about both the Massacre and the new materials posted for transcription. He will discuss the personal testimonies and histories of Tulsa Massacre survivors that can be found in the records, how these objects speak to the resilience of the Black community in Tulsa, and why transcribing them not only makes the records more publicly accessible but contributes to a deeper, unvarnished understanding of the African American experience. 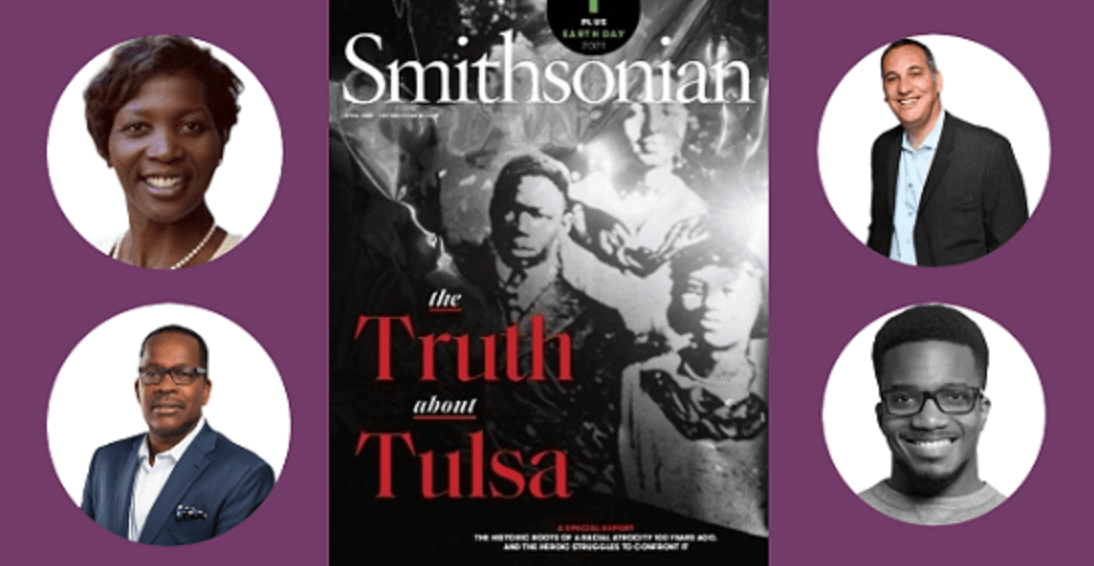 NMAAHC and Smithsonian magazine team up to commemorate the 100th anniversary of the Tulsa Race Massacre with a panel discussion that explores the development of the city’s Greenwood District, and the events that led to violent attacks on Black residents and destruction of the community, as well as the community’s subsequent regrowth.

Michael Fletcher of ESPN’s Undefeated will moderate the panel, which will include:

Smithsonian’s Sidedoor podcast:
“Confronting the Past”
Listen on demand

You can tune in to the Smithsonian’s Sidedoor podcast episode “Confronting the Past” at any time. 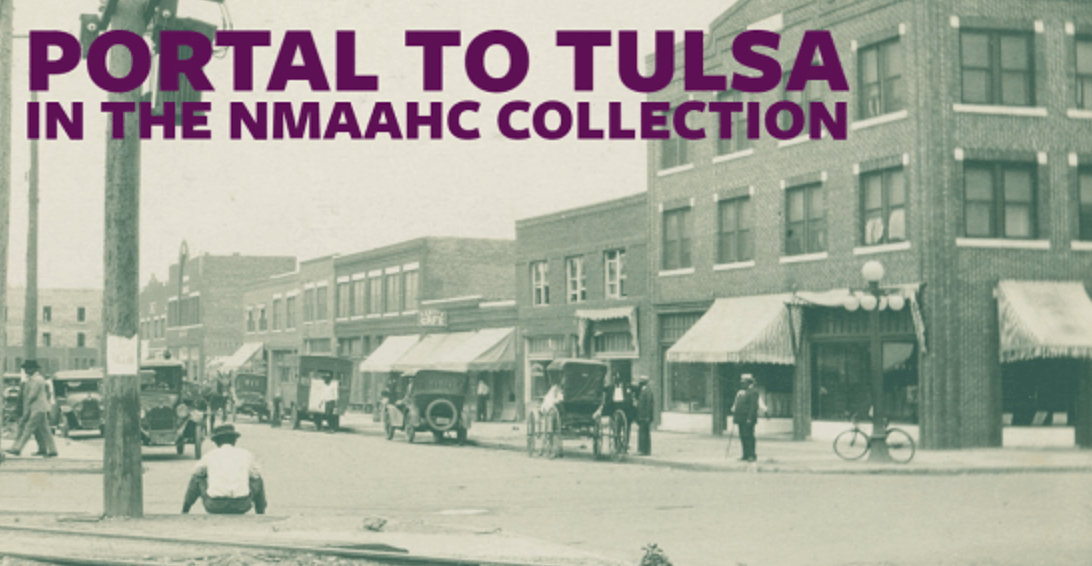 NMAAHC’s curatorial team has worked tirelessly to bring our resources related to Tulsa, Oklahoma, to you at home. The Tulsa Collection Portal is an online platform that gives voice to the stories of Greenwood and other African American communities in Oklahoma, including the destruction and legacy of America’s Black Wall Street.

We hope you will join us! If you’d like to support programs like these that bring to light stories of tragedy and resilience — and point to why we must remember the past to better understand our world today — then we hope you’ll consider joining as a Member of the National Museum of African American History and Culture.

First and last images, top to bottom: Photograph of the Greenwood District during the Tulsa Race Massacre, (modified image; see original here), Collection of the Smithsonian National Museum of African American History and Culture, Gift of Cassandra P. Johnson Smith. Photograph of the Greenwood District in Tulsa, Oklahoma, before 1921, Gift of the Families of Anita Williams Christopher and David Owen Williams.