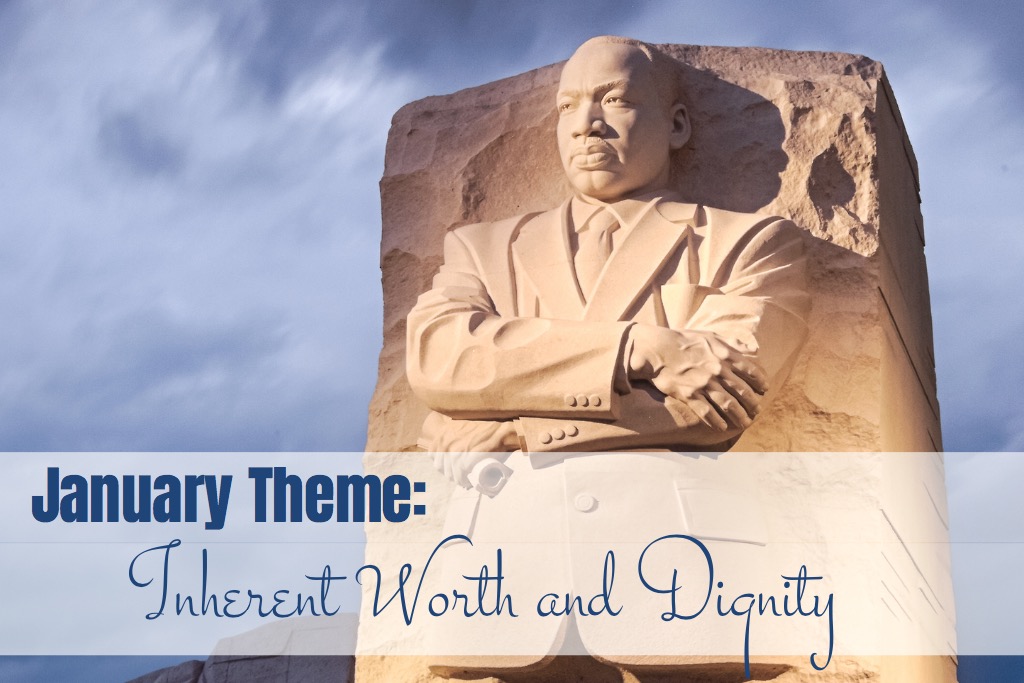 Our First Principle:  We, the member congregations of the Unitarian Universalist Association, covenant to affirm and promote: The inherent worth and dignity of every person.
I have the audacity to believe that peoples everywhere can have
three meals a day for their bodies, education and culture for their minds,
and dignity, equality and freedom for their spirits.
-Rev. Dr. Martin Luther King, Jr.

Over the years, when I have done sermons on our First Principle, there have been a few people who have argued with me about it.  It’s the word “inherent.”
To believe that every person has inherent worth and dignity is a belief or faith statement, similar to ones found in many religious traditions that also believe love and forgiveness are for all people, too.
Others of us, of course, love this First Principle the best of all seven.  It’s also good for our hearts and souls to know that we, too, have inherent worth and dignity.
I can’t help it that there are people who don’t believe in every human’s inherent worth and dignity, and a pretty good case can be made that it might not be true, such as the historical example of Hitler. I, however, do believe in our inherent worth and dignity; I believe it the same way that I believe we are all connected by Spirit, and that, no matter how far we stray or how evil we might become, we still possess this interior light of worth and dignity.
The real rub for most of us is not about the belief, but do we actually live as if we believe in every person’s inherent worth and dignity?  Do we really see the inner light of all of our family members, no matter how disappointing or awful they may have been, for example?  Are the boundaries we set based upon love for ourselves and love for them?  Can we still love them, even if we do not love their behaviors?
As a culture and a country, if we truly believed in the inherent worth and dignity of every person, we also would have addressed much better by now Rev. Dr. Martin Luther King Jr.’s imperative for all people: that every child would have three meals a day, good education and culture for their minds, and dignity, equality and freedom for their spirits.
Our faith in the inherent worth and dignity of all people, is what urges us to seek Rev. King’s social justice for all people.  Justice is the outcome of genuine love in the Jewish tradition.  And real justice and love aren’t simply ideas, beliefs or philosophies, but imperatives for action, so we are called to always work for the basic human needs of our children, to strive to provide nurturing education and environments, and to give every child the opportunity for their lives to flourish freely.
As it also says in the New Testament, “What good is it my brothers and sisters, if you say you have faith but do not have works? … Show me your faith apart from your works, and I by my works will show you my faith.”
In this New Year, I hope as individuals and as a community we can recommit ourselves to this higher mission which comes from a genuine faith in the inherent worth and dignity of every person.
In Peace,
Rev. Jann
Section Navigation